This post has been published by me as a part of Blog-a-Ton 57; the fifty-seventh edition of the online marathon of Bloggers; where we decide and we write. In association with ​Madhu Vajpayee, the author of Seeking Redemption and Shades Publications, the publisher of Friendship- Bonds Beyond Time. 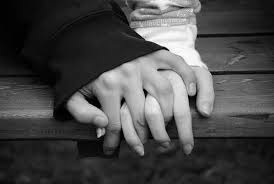 He gave her a smile and held her hand in his..

She did not say anything and sat silently with him.
He again went down into those silent lanes of his heart and sat there for that whole night.

She woke up quite early next morning, and started her usual routine. He was still asleep on floor, when she left him. His mind had become like this after that fateful evening.

They had gone for a dinner in a near by good restaurant. It was his wish to not take car and walk to the restaurant. Air was actually good that evening. It was a bit cold and air was blowing  with a swift pace. He was holding her hand, and then out of no where two guys came and tried to snatch her bag. She always carried her bag across her shoulders, so when they tried to pull it hard, she along with the bag was dragged, and him too. They however were unable to get hold of bag and finally ran away when they saw him.His head bursted on the electric pole there and he fell on ground. His eyes were open, but he could only see and sense blackness. His fingers moved, and sensed that she was still with her and then he closed his eyes for good.

The jerk, from the pole, was so hard that she got pulled with him and they both fell on ground alongwith one of the guys. They ran away leaving her bag.

She was dumbfounded, and last 30 sec that evening were not less than a shock for her. The person whom she admired and loved the most was lying unconscious besides her, and amazingly was still holding her hand. She, somehow to save his life, got up and took him to hospital. Doctors operated his head and found that there was nothing that was wrong with him, but the trauma of that accident would last for some time. They were unsure for how long would it last, and what would be the effects on him. She would only be able to come to know the real condition when he would open his eyes.
Looking at doctors, she did not hope much from God and only wished that he would remain alive. She did not allow her brain to  think about their future together, and only wanted to concentrate on one thing that she would hold his hand for the entire life.


To her surprise, he was found normal when he opened  his eyes. He ate well, talked well and remembered everything and even the blow that he had. He asked about her bag and those guys. She was so relieved, and was thankful to God. She started her life again with him, hoping that his health was fine and he was normal like others. They got married next month in a close ceremony, and everything was fine untill that night.
She found him sitting at the corner in their room. He was crying, and did not recognize her at first. She tried every way to make him speak, but he did not utter a word. She could not understand anything, and also did not think of relating this to that fateful day. It was only after some time did she realize that they followed the same route, where he had met with the blow.

She could not think of any other thing but to ask him to hold her hand, and he responded and held her hand. They did not speak a word, but he  remained sitting there holding her hand.
He was holding her hand but was not talking to her. He kept getting lost in his thoughts and whenever he came back to her, he gave her a smile. He would smile for a minute and would again go in his thoughts. She controlled herself and tried to be strong. She was afraid to even leave him for a moment, but she had no option but to go out and live the life for both of them.
She was determined to make him better. She daily sat with him, and let him hold her hand for hours without speaking anything. In reality, she was actually holding his hand rather than him.


This is her life now. She neither cursed  those guys nor doctors. She accepted the truth. For her it was enough that there is someone who in any condition can hold her hand for lifetime.

The fellow Blog-a-Tonics who took part in this Blog-a-Ton and links to their respective posts can be checked here. To be part of the next edition, visit and start following Blog-a-Ton. Participation Count: 12.

Posted by Unknown at Sunday, November 08, 2015 7 comments: Links to this post