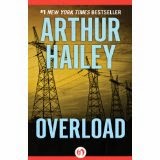 This book, the moment I picked it up, got loaded on and captivated my thought process compeletely. Arthur Hailey, like in his other books, crafted real life characters with which one could connect very easily and could actually visualize some of the instances happening in one's life. There is one catch, you have to belong to that particular industry which he had so well researched and described in his books, and if you do not belong to that clan then his books could  help one know, upto certain extent, about the lives of the people who live in those industries.

Overload is one such Hailey's book where he had delved into the lives of the people working and living in the power industry of California.The challenges that the power industry brought to its employees, to the state and finally to the people of the state were very well penned down, and one could sometimes feel that-"Oh, the industry of my state does this, all are same and crap everywhere". This common and true view point of the general people was, from  the beginning, inborne in the story. The amazing part was how the author took this view as base and changed this thought of general people into something which was close to reality.

The first part of the story revolved around the functioning of the power industry, the illicit relationships of Goldman and the media view point of that industry. The second part got us into plot when a revolutionary group "Friends of Freedom" came into picture and set down their disarrayed revolutionay motives infront of the power industry. The third part got all the pieces in place, changed the view point of the public for current scenario of power industry in California, and everything else sorted out including Goldman's illicit relationships.

Reading any of the Hailey's books makes you feel like you are living your life with his characters, and you so very easily make the connection with them. This is the reason that each of his book is unparalleled,unique in its content and worth reading.