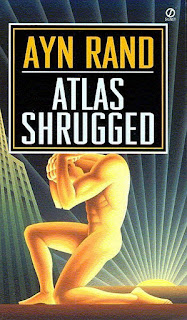 
I took this 12 inch book only because it is an Ayn Rand’s piece; and if one has read The Fountain Head then he cannot resist picking up any of the Ayn Rand’s literary piece. I also took Atlas Shrugged with thoughts that once again I have this golden chance to delve into her  philosophical world, to read her eclectic theories and at the end feel myself as the changed and the inspired man.

The main line of the book was to highlight the importance of collective work done in right spirits. One could call a collective work as done by any small group, team, society or the entire world. The definition of the right spirits could be confusing but simplistically it could be put up as the work done with the good for oneself and benefiting the society as well. This illustration was based on the ideas expressed by the Ayn Rand through her beautifully woven characters.

Ayn Rand had chosen an unimaginable theme for doing this by basing the story on the phrase said by “they”. This “they” is when we say ‘ as they say’ when the original speaker is unknown. The used phrase in the book “Who is John Galt” would make you really wonder about John Galt and how it became successful in creating that curiosity in the reader for knowing more and more about who actually was John Galt, and how he had changed the world and would continue to change it. She had explained her theories of wisdom, man’s freedom to live, importance of deeds, meaning and need of physical pleasure, thoughts driven by ego, hatred and jealousy through her varied characters comprising of Dagny Taggart, main fairer sex protagonist, Henry Reardon, one of the great intellectuals of his time, Fransico D’Anconia, another intellectual driven by his motives to keep the respect of his deeds and to not let go off the gain to other people.

This story of the world of 1950’s that surround these characters and Rand’s philosophies were very captivating in the beginning, but till the end one would feel like it getting exaggerated for no reason. One would start feeling, when there would be 200 more pages to go, that why this story was not being put to an end at that instant. When the end came, I found it in the movie style heroic drama and which could have been done in a much better way. But one thing was achieved with this book that author had put up her ideologies and philosophies very impressively and had made them timeless.

This book doesn’t stand against The Fountain Head anywhere, but I would recommend this book to any one for the philosophies and ideologies illustrated around the story, and not for the story. If one can keep his calm and read philosophies and varied thoughts of many people in multi-varied contexts then this one is surely for you and you should just grab it.

Posted by Unknown at Saturday, February 09, 2013 2 comments: Links to this post