This post has been published by me as a part of the Blog-a-Ton 35; the thirty-fifth edition of the online marathon of Bloggers; where we decide and we write. To be part of the next edition, visit and start following Blog-a-Ton. The theme for the month is "...and the world was silent again"

Today I don’t know what happened; I felt that there was something odd, some vague feeling as if the cloud of sadness had overshadowed every colour of joy and happiness. Everybody I saw today had fear in their eyes from the unknown danger that they could not control. There was no feeling actually for anybody that I could see on the human face, no love, no hatred, no likeness, no jealousy, no agreements, and no altercations. It was the same feeling as I had read in books only of the fear which I had never felt, and the death which I had never seen which would bring an end to a living age. The end which the great dinosaurs had seen and now it is my turn, it is mankind’s turn to witness the end of self being. This would again going to bring the achievements of intellects, the hardships of the brave, the battles of the warriors, the structures of the creators to the mud of destruction.

And as I had read those lines in the books that told me about of one living age, the history of this mankind would be rephrased into some lines to be read by the one of the unknown kind. I, a tiny being of the mankind who is going to be buried the next moment, can only write the last rhyming lines of sadness…………………. 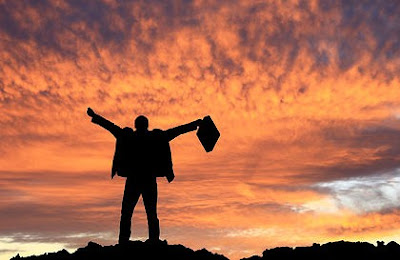 I woke up today by her tender touch on my forehead. I saw her lovely face; I smiled, rhymed some vague lines in my head as if in some dream about to end and closed my eyes again. She gave me a sweet kiss and I again like all the other days realized that the day would be the most cheerful days of all. There was a warm sunlight today, and I, standing on the windowsill, saw the birds flying high to the horizon giving me the indication of new hope, new victory. The horizon which has in store lots of achievements for me, which has in store lots of hardships that I will overcome, lots of battles from which I would emerge as a winner and at the end lots of love that I would bring to my loved ones.

I ate breakfast, hugged her and went out to work. There were people as usual busy in their own work with a hope that everything that they were doing would bring in lots of love in their loved ones life. A cloud hovering on the sunlight suddenly struck me like an epiphany and I remembered in bits and pieces the dream that I dreamt last night. I closed my eyes for a moment lesser than an instant and there was bright sunlight everywhere shouting, smiling and calling me and everybody in the world of peace, happiness and smiles.

I realized that world can never be silent…….:)

The fellow Blog-a-Tonics who took part in this Blog-a-Ton and links to their respective posts can be checked here. To be part of the next edition, visit and start following Blog-a-Ton. , Participation Count: 12