I often wondered when I was a teenager, that how would it be to work in an office, whether it would be fun or boring. I had known that time from friends that there would be lot of people, and in most of the cases it could be like a YES-BOSS type job. There would be lot of competition with colleagues for better performance. There was one common doubt amongst all my friends, whether we'd be able to apply our learning in the office???? And this thought seldom use to ignite another flaming doubt in our minds was whether we were learning anything at all or not. With these random thoughts, me and my friends graduated from colleges, and also got jobs.

Office was quite good, and the first impression of that new world was quite good and fascinating where only moolah drives the show. However, when we all friends met after some time and shared our experiences and observations, it had shown an entirely different picture. There were many epiphanies to ponder about, many stupidities to laugh on, many technologies to share, discuss and gain, but apart from all these there were many interesting and mindfully crafted incidents, or I would say different types of phenomena that take place in any office. 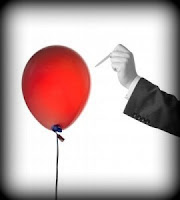 One of them is "Blasting the balloon."


When that person chooses to remain silent at the time of a problem faced by his colleague and let it grow to an extent of his wish .In some cases condition becomes so critical and severe that if the problem grows a bit more would cause severe losses for the industry. At this instant, he dramatically enters the picture and solves the problem like a Hindi hero film. In just a sudden spin of time, he again becomes a hero, a cutie pie, a superstar, and a problem- solver in the eyes of so-called illusioned bosses.

Sometimes people know that the person has intentionally let the problem grow, but in the real conditions that knowledge of events doesn’t really matter a lot, after all industry has been saved from a severe loss. This is cunning but a powerful phenomenon that if acted at the right time can drive the career path of that person to new heights of success.

I sometimes wonder whether such phenomena are really required for the person to achieve success and even after that whether he would be able to fight that fear of losing job, whether he would be able to overcome that feeling of insecurity from his colleague because of whom he forced himself to act in such a deceiving manner. No matter he reaches to any height with such tactics, but that growing insecurity and fear within him will reach to the greater and unimaginable heights. Whenever he would have to give a stride to his career, he would always look out for phenomena like blasting of the balloon; but at the end of everything he would find himself struggling for the happiness in life.

I feel that it is attitude that matters a lot rather than anything else, and a positive approach to anything and everything is sufficient enough for any person to reach to the desired heights of success and happiness. …WHAT SAy???

This is one of my observation in my office that I thought to share, there are many more like that which I would keep sharing from time to time. If any of the reader has thoughts about the happenings in his/her office may share here, as this post says sharing of thoughts at right time and place is always better and fruitful.

You will be glad to know that after thumping success of hamarivani.com, which is a unique rendezvous of Hindi bloggers and readers spread all over world, we are feeling jubilant to introduce Bloggiri.com.

At Bloggiri, your blog will get a huge horizon of new readers to share thoughts and ideas with you, because your blog is just reflection of your soul and inner beautiful.

Now what are you thinking, just submit your blog at Bloggiri.com and give a new meaning to your life.

Actually not only in office, attitude matters a lot everywhere. Though, the experiences at work teach us many things.

Thanks for sharing your views.