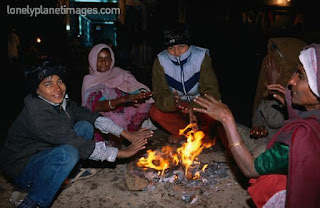 It was a very cold night. I went out with my friend around midnight to find something to eat. One would say it a scavenging process, as at that time you could only get the left over from the day. It didn’t matter to us; we just wanted anything to eat.


We searched all along, and couldn’t find any opened shop, but fortunately a very small milk candy (kulfi) shop was about to close, and we reached there on time. There were some five six people sitting outside the shop in circle surrounding the bonfire. We also felt better near to that, as it gave us a bit comfort from the chilly wind. It actually was a paradox that we were eating a kulfi in the near comfort of bonfire, and we were enjoying it. It was also the effect of ambience that gave it a sweet taste.

At first, we didn’t pay attention to the people sitting around, and were talking in ourselves. But then their sudden laughter caught our attention, and our ears got automatically dropped in their:

“ …..Ah all that is fine…but tell me, how Lord Ram could have travelled long distances on his feet”.

Then one other man with long hairs and big beard answered, “In the old times, people use to get pure food, and their routines were good not disturbed by the illusion of today’s world, and then they were Gods….”

Then after a silence of 30 seconds, other man with broad shoulders responded, “Actually, they could have had some conveyance which we do not know, as whatever we know is from the written records, and is believed to be preserved from thousands of years. May be, we do not know the real condition, what could have been there at that point of time, and it is just our assumptions that this could have happened.”

Then other person intervened in the discussion, “How can you say that, we do not know the real condition, and to put up such statements is like offending God, which is not right”

“I am not saying that it is not right, but it is just a possibility that I think can be true, I also trust God and also the other rituals equally as you do”….

The fourth person with thin moustache entered into the debate, actually to resolve it, “oh ho…the good thing is we know something about it…..and I feel it is better to respect what we know, and try to keep searching for what we don’t know. There is nothing right or wrong here, it is just a perspective which can take any blind turn. I feel that perspectives are only for giving it a thought on, if you like and not for fighting on it. “

The man with the big beard, rubbing up his hands continuously to get warmth, added, “ I also think it is right, Lord Ram has given us good teachings, I think we should learn from them rather than questioning them”

Then the man with broad shoulders responded, “I am not questioning any of the sacred happening that had happened in the past. It is just as he said, “pointing towards that fourth person, “that it is only my perspective, and it could be whatever I can think”

Then the shopkeeper himself added, “But, whatever everyone says, there are many things that we do not know….”

I didn’t notice that my friend had finished his kulfi, paid the money and is just waiting for me to finish. After a second or so, he said, “ Oye.. .. eat fast, let them blabber whatever they want, let’s go it’s getting very cold, and that kulfi although it was good, but gave a cold burn to my teeths.”

We then came back to our place and slept. The next day from the morning itself that over heard discussion was in my mind, and I actually also agreed to that man’s point with thin moustache, about one’s perspective. I actually also remember a fight that I had with one of my friend because of our different perspectives, and regretted it now.

People say that eavesdropping is not a good habit, but I feel that its goodness depends on what you are dropping your ears on….


Eavesdropping actually means listening secretly to a conversation, but I felt  appropriate to use it here, and you can take it as my perspective for using the word Eavesdropping here.

No, it's alright when we listen to a general conversation. Sometimes, we learn a lesson or two. It must be a enlightening experience for you.