When Journey meant more than Destination

This post has been published by me as a part of the Blog-a-Ton 25; the Silver Edition of the online marathon of Bloggers; where we decide and we write. To be part of the next edition, visit and start following Blog-a-Ton. The topic for this month is 'When Journey Meant More Than Destination'. 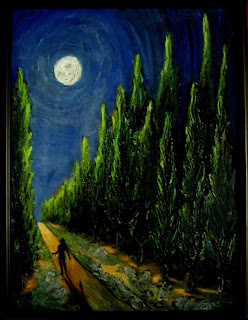 ﻿
Today also he wake up at 7 am. His routine is always fixed. He was as usual happy and had turned his life in such a way that he always smiles. There was a time when Amay use to be impatient and anger use to take over him. But some deep thinking and meditation had helped him in knowing who he is and what it really takes to live in this world.

Amay works in the pharmaceutical industry, some 30 kms from the town. He loves his job, and the interesting part that he finds in is his more and more interaction with the other people. He feels that it helps him to understand the world and the people around. He sees the world as all the people are somehow connected, and so he enjoyed every moment of it. He has a team of 8 people, and the team also enjoys working under him. It is his positive attitude and approach to impromptu conditions that got him a count in the most talented employees of the organization.

He sometimes has to work almost 16 hours a day, and he enjoys it. He actually felt happy after doing the work; it is like a feeling of achievement at the end of each day. He tries to instill this feeling in his team also.

Looking at his continued exemplary performance and dedication towards work, company has also given him early promotion. He had set certain targets for his development, and that can be achieved by utilizing the company sources. He just had to use them optimally and efficiently. While going today to office, he was sitting alone in the bus and was contemplating on his next steps to achieve his targets, so that he can then plan to change his company and would move to a bigger and much better profile. Whenever he thinks in the bus, he keeps looking out from the window on the changing terrain from city to country land to arid place to the mountains. Actually he only sees them but his mind is always somewhere else thinking and analyzing on stuffs that he only knows. He therefore failed to notice as the bus stops at one place and one of his team members Akhil took seat beside him.

Akhil is a very promising and a sincere guy. He belonged to a poor family and his father sells clothes on his bicycle. But there was one thing good about his upbringing, it made him brave and bold, pragmatic and a student. Student in the sense that he always tries to learn new things from anybody he interacts with. This quality actually helped him in getting a prominent position in Amay’s team, and he was thankful to Amay for that. He thinks that Amay is helping him for just no reason. He actually is naive at this to understand the reasons and the justifications of him holding a good and a responsible position at the work. But one thing is true, he always looks out to Amay for any kind of personal or professional advice, and he always got influenced by his charm and views. Today, also he wanted to seek an advice, and so after waiting for some time finally brought back Amay from his thoughts.

“Oh, hi Akhil” surprised, “ I am sorry, I didn’t notice that you were sitting here”

“Anyways tell me, how is the morning today?” Amay always talks like this, just asking anything that comes to his mind; but yes in an appropriate manner.

“ Oh good” he replied and maintained silence for a moment. Amay understood that there was something going on in his mind that he would like to share, so to make him feel more comfortable, he asked, “ How did you find that song Chikini Chameli , Katrina was looking good….huun”

He smiled with the hidden gestures and said, “ Yeah, it is a nice song and now there is some new song on the road of Malaika Arora , she is also looking great”

“Just kidding, yaar.” “Tell me how life is going other than work”

“Amay, I need to take one personal advice from you” and waited for Amay to answer.

“Actually, I am planning to join some institute for doing M.B.A. How do you see it?”

“Oh, yes it is good, it will be better for you”. But then after answering he thought about the work. Amay knows that this guy would make him suffer if he goes. He is also aware that whatever he says will hold importance for him, and that Akhil trusts him a lot. He has to give him a genuine advice as a person, and not as a professional. And then he continued…..

“I think you are thinking in the right direction, and I will say GO for it, but just keep one thing in mind, select a good institute to do an M BA, and don’t just do it for the sake of doing it. If it takes one more year then be it, but make sure that you are going at the right place.”

And then they talked about colleges and their placements, and then sorted out some good colleges in which Akhil should apply for.

While retuning back from office, he was thinking about Akhil only, and his dedication to excel in his life. He was surprised on some instants that how much Akhil trusts him, and that he shared his personal plans with his boss, knowingly that it could affect his present role and responsibility. He was also impressed and inspired from Akhil, that how fearless he is in his life. He decided that no matter what happens, Akhil’s roles and responsibilities will not change.

He also thought about his plans to change the company, and how he had strategized his steps to achieve his developmental targets from the present company. He actually also felt sorry for himself, that he never even gave a thought about his team members, and their expectations with him on a personal level. He indirectly is responsible for their future growth also. On his road to destination, these team members are like small plants, and he has to water them and feed them. If there would be no plants there would be no growth. He also became happy for this epiphany and came to the conclusion that in any journey to success, there are many things that one has to take care, which may not be related to their goal. But that would be the important part of other’s life.

Amay felt that all the people are connected here, and the journey can only be completed by giving and taking with the people on that road. It may be independent of the set destination, but the people would always hold the important role in getting one connected with this nature.

The fellow Blog-a-Tonics who took part in this Blog-a-Ton and links to their respective posts can be checked here. To be part of the next edition, visit and start following Blog-a-Ton.

Nice work.. But i hope the formatting of the text can be better and you can take little more effort to maintain the look of your blog. All the best for BAT

@gireesh
Hey thanks for the honest input..i am glad...i am sure both of them will improve in the time to come...

In a team everybody is connected professionally as well as personally. Lovely writing...

Well lucky for Akhil that he got such a boss!