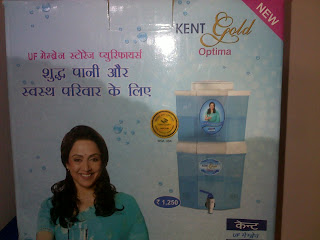 I have read it many a times in newspapers and in psychological books that whatever you like to have in your life, just stick it in front of your eyes and you will get it. Yes, I believe this, but I didn’t follow it in what I am now going to share with you. Even this was also not in my mind when I bought Kent 10 liters water purifier, that bore on its box Hema Mailini’s photo from that ad where she and her two daughters Esha and AAhana also featured, some two weeks back. I started using it as it is supposed to be, and in my room I kept that filter on its box itself. I obliviously kept it in such a way, that Hema Malini was in front, and whenever I see that side, I also saw her (don’t take me wrong, I am talking about dream girl Hema Malini).

Well, this is a joke, but it made me think that way on that dreadful night of 23 August, when I was in my dreams with somebody I don’t remember, that filter fell down, and when I wake up at my usual timing of 5 45 am (surprised naa..i have to leave for office at 6 50 am, as it is some 40 km away from where I stay), I found my room filled with water, and filter upside down on the floor, and not a single drop inside it. Keeping my patience, (the trick that I have learned recently), I quickly took my land lord’s wiper, and started draining the water out from a small outlet, and thank god it was not choked. But, it was a mere one inch dia outlet, how much could it contain, so all the water keep coming up again in the room, I then took a mug from bathroom, doing as quickly as I can, as I have very limited time, and started collecting the water and filling it up in the filter. This was somehow useful, and 90% of the water was wither drained out or was in the filter. I left 10% for the maid to clean up in the noon. 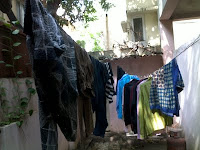 As expected she did clean up, and room to my relief was dried out till I came back in the evening. There was some soggy odor in the room, it was like as you enter you could sense that sogginess inside the room, I then looked up on the ceiling as there was nothing above it, meaning it is directly exposed to merciless rain, and even the merciless shades were visible with a small wet area at the corner of the wall. But, I was sure that could not be the actual reason, and then I saw some foam pieces kept at the heighted space in the room (one you usually see in the old style of rooms, I think of 1990’s), and I assured myself, that yes this was the only reason of the smell, and I thought to just throw it out, but didn’t do it. Instead, next day informed my landlord about the smelling issue, and told him to remove that scrap. 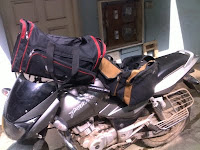 Even after removing it, that smell was prevalent in the room, and then on 27th August, I took out a bag kept below my iron bed, and was flabbergasted to find it in a wet condition, and that was not all, there was one suitcase and a bigger size bag, and all of them were completely wet, all my new clothes, designer shirts, jeans, novels, even my check book everything, it was like I was also drenched with them, I again with my new trick, keeping up my patience, emptied all the things, and slowly hanged all the clothes outside in my landlord shed, thanks to them that there is a small area which is not open, and one can keep clothes hanging, even if it rains. But rain, OMG, that merciless rain, it’s 28th August, 4 53 PM, and still not a single thing is completely dried, although I am quite successful in removing that soggy odor, but my mind is now full with these soggy thoughts, even two of my good shirts got color from other clothes, and am not sure what best dry-cleaning can do on them.

I actually spent this week with water, starting with this incident, then almost daily getting drenched while going to office bus stop, and at the end of the week, I don’t know how, it seemed to me that my mobile was gone, as my voice was not audible to the other person, but somehow after shouting loud, it cleared it; and it was not all, my bike’s lock got jammed, water filled inside it.

At the end, I will say that this is good, as I strongly believe that whatever happens with you is because of your thinking, and I also believe that I have very good thoughts, so may be the good is yet to come. 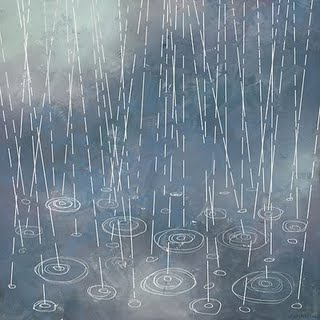 NOTE: This post is written by me some days back, when I was travelling in my office bus from Phaltan to Pune . My office that time was in Phaltan. I for some unknown reason didn’t post this, earlier.

Read enjoy and smile
Phaltan is a taluka in Maharashtra state under Satara district, it has a low population of around 50000, people, of which 99.9% are Marathis, and therefore a person oblivious to Marathi like me will find it a challenge to communicate with the people around.

It’s raining heavily here, and am stuck in midway from Phaltan to Pune; actually, outskirts of Phaltan, as we are some 10-12 km from it only. I think, it’s raining with 4-5 m/sec, and I know it’s pretty absurd and unnatural to estimate the speed, but I am nothing left to do, except typing whatever comes to my mind, and listening to songs. Let’s see, where my wishful thinking will take this post.


The auto just passed my window; it was a six seater auto that runs only in some cities. There is one small stable, in front of me, which I think has 6 cows, oh sorry, I cannot make out from this much distance whether it is a cow or an ox, but I am sure there is no buffalo. I sometimes don’t understand, why this creature always seen as chewing the cud. Finally, bus started after some 20 min, and moved a bit, and there I find one more stable of similar size with almost same number of those creatures, but here sitting silently and watching us creatures passing by, after moving a bit ahead I find a land, filled with water due to a bit slope in it, and that makes me unable to predict its fertility.

And, bus finally started with its original pace only to stop after some 200 metres. One Tamarind (Imli) tree, yes am sure it’s tamarind, has fallen down, and may be that is the reason for this jam. I can not see clearly outside, as there is a mist formation on the bus window, but I can make out one man with shabby ‘dhoti’ wrapped around him ferreting something in land, may be that is his farm land, where he grows sugarcane. This region is actually famous for sugarcane farming, as it tastes all rainy, winter and summer season, and it just suits farming of tropical plant like sugarcane that requires spice of all seasons, and therefore Phaltan has first private sugar factory of Maharashtra known as Sakharwadi . In fact the farming is so widespread , when I sometimes stay in Phaltan due to long working hours, and in that by sheer coincidence if I land up in a hotel in the vicinity of any farm land, then on that pleasant night in dreams, I gift perfumes to my girlfriend, having a sugarcaneous odor. Ah..It is very difficult for the outside people to spend their first night in this way, as it sometimes becomes so nauseating, that you will think to just runway. There is nothing much of farming here in Phaltan except sugarcane. People have small shops of their own; there are no malls or multiplex, just an optimal bazaar, meaning to say that you will find all the necessary things to live your life. But of course that is not all what it takes for a person like me to spend an evening after work, and I therefore prefer daily to travel to Pune.

The bus has now moved way ahead, and the traffic has become smooth, but it’s still raining; the good thing is now the roads are good, and there is no pool of water in the adjoining areas. As we moved ahead in the connecting village Lonand, people just standing outside their houses and watching the rains, may be thinking about the possible eventualities of the rain. Houses are of ancient style, they have uncemented walls, and even from a bus window you can make out the regular rectangular lines as deep as ruts in the roads. Children here play with ‘ balls and tops’ . This always reminds me of Khirkiya, a village, my mother’s home town in Madhya Pradesh some 2 hour journey from Itarsi. My nanaji has a big grain mill; there we use to play these games with my summer friends. I remember them as summer friends, as I have only been there in summers. It was fun there, and I sometimes really miss that.


We entered Bangalore-Pune highway, at around 7 15 PM, 20 min late from the daily timing, and the driver got energetic after landing on a 4 lane broad highway, and started driving wildly surpassing each and every vehicle. He even doesn’t seem to notice any bumps, and is making us nostalgic about our kindergarten days, as we all jump on seats as if we are on a see-saw, on every bump. Nobody is stopping him, as the priority is to reach home after hectic office hours, no matter if your intestines get mixed up inside and all the arteries started playing ‘who pull’s first game’.


This is daily journey, but it is not so pleasant always, as daily travelling sometimes create problems like body ache due to improper posture, or even can result into dull mood due to the monotonic atmosphere of it, but rains like this with cool breeze is always welcome for the people like us, which makes us fresh in our minds by invigorating winds post showers, and the smell of mud, that is pleasant enough and cannot be described in words. I sometimes wonder how would I have liked the same rain, if would be travelling on a bike, however the likeness of anything depends entirely on condition, and looking in this way, I just simply love this breeze and rain.

Posted by Unknown at Monday, August 22, 2011 No comments: Links to this post