Its 00:10 A.M, and I am sitting at my company's facory (fyi, i am a mechanical engineer), waiting for some machine supplier. Its not my habit or hobby or some unique, crazy off the track desire, bu

t my company has the inauguration of this new plant  on 14 th of this month. This inauguration is going to have the presence of Maharashtra CM, Sharad Pawar and may be their followers.

This inauguration has taken a toll on us like anything, I have never imagined in my lifetime, that I would be sitting like this waiting for some supplier at midnight, just to get some glasses installed on my machine. This dosen't end here, we even had to clean machines because there was shortage of workers, and since it has to look like a word class facility, so  there was no option left other than cleaning ourselves.

I feel this is simply madness to just prepare ourselves to present the work to that bunch of people who do  not understand a bit of it. But, there is one thing that I would like to share, is delivering the impossible in a very short span of time will give you so much learning about people,  your profession, and about life; and the most significant would be to understand the different people's psychology in such circumstances.

I will end up here, as my supplier I suppose has arrived.

Posted by Unknown at Friday, January 14, 2011 No comments: Links to this post

Few days back, I observed something that can make a common man angry on government or their officials. 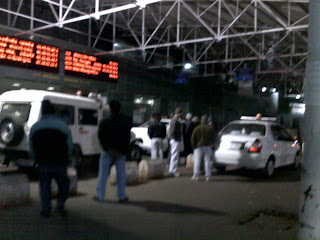 The cars in the above pic were parked right in front of the entrance to the railway station, where in the regular time, even common people’s car is not allowed to stop for more than thirty seconds, and ironically these cars were standing there for more than two hours, and surprisingly with full police protection ( I don’t know for what)


I instantly thought to blog about it, and captured this scene to share with you all, but actually when I sat to pen down certain thoughts, I actually felt that it is not a fault of government officials, and they should not be blamed. My reaction that time towards those government officials for sure was to blast them up with abuses and blah blah, but I also have other thoughts about this issue


I have other pool of thoughts to share, from the peace of my mind…


When human being first took birth on earth, he was oblivious to the nature where he had to flourish himself, and his generations; but soon realizes that he has to mould himself as per nature to lead a meaningful life, he has to be in harmony with the nature, and this realization of that First Man(FM) way back brought you and me here discussing this topic.

Thus, slowly FM lived life as per nature, and also taught his generations to live. There is this law of nature ' everything changes', which is also true for each and every existing thing around, and so very well applied to this man’s learning of being in harmony with the nature.

This transformation happened slowly and quasistatically, and moved hand in hand with the civilization. With the development in the form of industrialization, and invention of new technologies to make his life much better, man also started forgetting the basic law of being in harmony with the nature, with which the FM started life on earth.


Survival of every specie on earth is dependent on each other, and can easily be understood in a very broader sense through Food Chain (that I am sure we all remember and had studied in our primary school), and this is the simple law of nature, which everyone has to follow. Every specie bears equal place in this world. Men while using their cool brains to utilize all the resources around only, attempted to be in harmony in the nature. Consequently, the learning of being in harmony with the nature was lost in between, as the original word loses its identity amongst a group of gossipers.


It all started with (I feel this), with the beginning of tyrannical thought of a man, of being superior to others around. The seed of it was the each and every development that took place here, because the man responsible for it became superior to the others using that technology.
This gave birth to greed, jealousy frauds blah blah


Today, this has moved many steps ahead so much that this has become the thought process of each and every human being here, but it’s ok this will also change only when we can again divert our thinking towards being in harmony in nature, and that every individual bears an equal position here. This will take time, but it will happen for sure.


I am of course angry with those government officials, misusing the place for their personal use, and I request all those @#$$$!@$% to try to be in harmony with the nature.


Posted by Unknown at Wednesday, January 05, 2011 2 comments: Links to this post