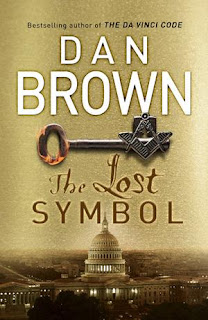 Dan Brown produces yet another engrossing and mind boggling plot in ‘The Lost Symbol’. His combination of facts from Christianity, the secret societies, symbology (he is crazy about them..his books say it…) along with the spices of scientific facts (or fictional scientific facts), crazy drills, and the study of mankind has given the readers a truly entertaining piece. But, one must be careful as this does not stand against his master pieces and my favorites ‘The Da Vinci Code’ and ‘The Deception Point’.


The story starts with our famous symbologist Robert Langdon, being called in the US Capitol House to give a lecture in symbology; but, soon realizes that he was duped by our villain of the story, who has kidnapped the great Peter Solomon, the echelon of the secret society of the Masons, or the brotherhood. This brotherhood believes that there is a mystical pyramid, which through inscriptions on it, opens the door to the human wisdom.

Now, this villain, known as Malakh wants our famous Robert Langdon to help him solve this mystery of secret pyramid, for the sake of Peter Solomon’s life. Here start Brown’s typical twists and turns of the story involving puzzles and symbols. Katherine Solomon, is a help to him for her dear brother’s life.

The villain was also smart enough (..or Brown), to threaten Iano Sato, the CIA director to help him for the sake of national security. All these things make this an entertaining and a cognitive book.

The interesting facts about science and mankind, makes this a different one from the other suspense thriller. However, this goes without saying for all the Brown’s books, but his other books were more satisfying than this one.

Thanks for telling about this book. I'll read it soon now.

@abhilash
yup..you will find it good

hey i m anshay frm bhopal i find ur blog really exciting ,,,,,can we friends? whenever u come online just pls do me a favor just review my blog and contact me i need ur help ur posts are awesome i too wanna write some of theme
http://www.heartofviper.co.cc/

@the righters blog
hi anshay, yes we can be friends, i ll be visiting your blog very soon