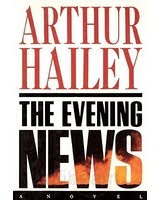 Book Review:The Evening News
Authored By: Arthur Hailey
The Evening News is a book about the people driving the media world. It describes their professional as well as personal lives with a very descriptive and a moderate tone.
The story starts with the happenings of the most popular news channel CBA News, and the people working there, Crawford Sloane, their anchorman, Leslie Chippingham , CBA news President, Rita Abrams editor, Harry Partridge, their best in class reporter, and several other people, responsible for the daily activities of the news channel. It takes a grip when Crawford Sloane’s wife and son got kidnapped, and then CBA starts searching  them, for their best in class colleague, and of course to broadcast latest and the most happening event, ahead of others.
The story moves on with the progress in search in a periodical manner, and in between the eclectic and the best in class guessing makes the pace for locating the victims. Hailey as usual, had been very descriptive in all the aspects of the story, and had beautifully and intelligently described the lives of the people in the E-Media. This book, though with its good story line fails to match with author’s other books-Wheels, Airport and Hotel. However, he had successfully described the lives of the people, which is the USP of his all the books.

How would you handle it if your partner’s EX wants him or her back? Soch Lo! 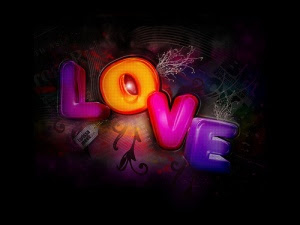 Oh dearest, I love you so much, I promise you we will have a wonderful life together, you and me will always be entwined in the beads of love.


But, darling I need to tell you something..

Yes, tell me, I don't know whether I would be able to listen or not, let me just watch you, and only watch you, for the rest of my life,

I am actually afraid, how would you react after that….

I am already lost in you, now nothing matters to me as far as you are with me.

Oh, please be serious, listen to me, it is about us, our future, and my past….

I know everything, but do you know what is there between you and me?????

Let me tell you


It is love that binds us


Love, a soul of our relation ship


Soul which has existence only with our togetherness

Why don’t you listen to me, I am very much confused with my life,

No, let me complete, I need to speak, if I don’t speak now, then it would be too late for both of us …


I had an affair with another guy in my past. We loved each other a lot, but time and circumstances divided us, and we had a break up…

After some time I met you, and we started loving each other. I started feeling love with you, in a way that I had never felt before, but you know this world is very complex, and so life can also not be simple.

A few days back, when you were out for some work, I met him, my old lover, and it uncovered all the good times, that we have had together, but there was nothing same between us, after all it had been a long time. He again expressed his feelings for me, that time divided us , and that he wanted to be with me again after, all that had happened with our lives after that break up.

I started feeling guilty from that day, because I didn’t let you know about my past.

A hustle of air, and the lightening clouds stole that moment of silence between them…

I thought about it a lot, and only remembered the lovable time that we spent together, he has no meaning in my life. When I met him again, only after that I realized how much we love each other.

This time, even the clouds and wind couldn’t broke the silence between them,

He went close to her, lifted and kissed on her forehead.

Do you know what is there between you and me??

Let me tell you


It is love that binds us


Love, a soul of our relation ship


Soul which has existence only with our togetherness


Togetherness, it has meaning only in this time


Travelling is a way of life,


And Life, it only has meaning with you, and me

Bachelors...Oh my god!
They live their on that 2nd floor, they must have done that. I saw them once there, i am sure they are the only ones…. If they would have not done it, then who else....
Bachelors’ living away from their homes must have heard such comments in their lives. These are actually common reactions of the married people about bachelors, and sometimes they act like they were born married. I don’t understand whether they are jealous of bachelor’s care free attitude, their independent life, which they can’t dream of living, their passion for doing anything and everything in life, which they can’t develop in themselves, because it gets pulverized with age and marriage; and if none of the above holds true, then they must be having some genetic disease which doesn’t allow them to behave well with the bachelors.
It is not once or twice that happened with me, but it had been a frequent occurrence that I was ill treated from this breed of people. Once it happened that me and my friend (of course both bachelors) nearly missed an accident with a married man, and we heard from him "God help their parents who send their kids to study"
It was ridiculous, and it was not ours but that married bastard’s fault.
This is not all, the society in which I live in has put a notice in the common area against bachelors,  which looks like this- 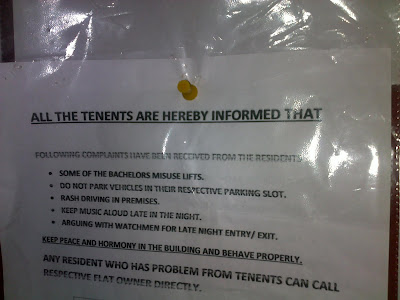 This is completely insane, and whenever I see this my mind goes off the track.
People think that bachelors didn't understand anything, didn't care for anything but they should also know that they have developed some sense of identifying right or wrong in the things around them, which sometimes is better than older people. This sensibility of identifying right or wrong, in bachelors is developed as per the environment and the society in which they were brought up, now the same people who curse these bachelors for their care free attitude are the responsible ones, because their children might also be getting cursed or would have been cursed or would get cursed at some point of time, and for which they ‘the parents’ only hold the responsibility, because they brought them up in the society which taught them the rules and morales for which they get cursed.
These people should not forget that they are not impotent, and that they also have children who have the ability to grow and come into the category of bachelors.
They should think that the societal life which each married man dreamt of is only possible if it has people of all ages, and if this is the case then they should also understand that they need to live creating a comfortable relation with the people of all ages, and only then will they be able to lead a happy married and societal life.
OATH:
I, in front of each blogger, promise to treat the bachelors with due respect, when I get married, and  will make sure that they will be well treated with the married people around me.
THANK YOU FOR TAKING THIS OATH.